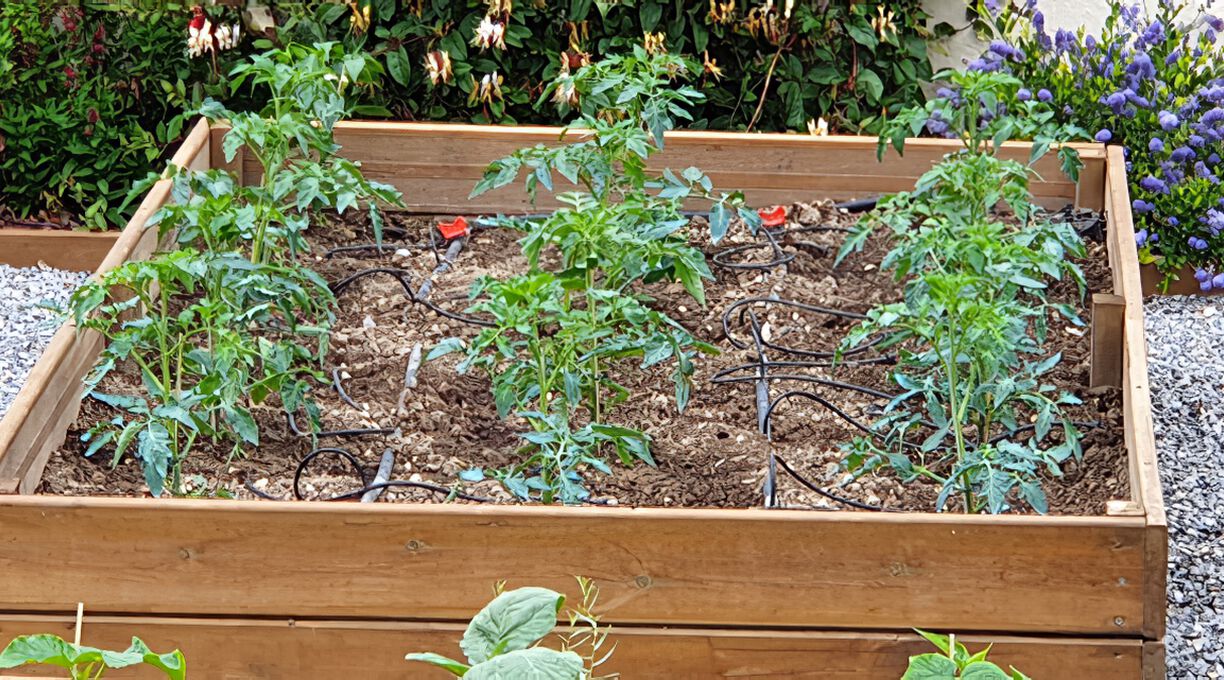 GOAL OF EXPERIMENTATION AND CONDITIONS OF REALIZATION 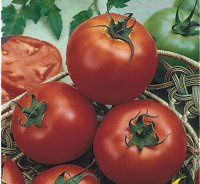 THE TOMATO VARIETY AND CONDITIONS OF EXPERIMENTATION

Tomato Cobra is a large-fruited type (diameter from 65 mm with a fruit weight of 100-200 g), well known for its taste.

The tomatoes were planted on May 11th. Climatic data remained in the seasonal norms until June 19th.

Then, an episode of high heat started with temperatures almost always above 35 ° C with a peak above 44 ° C, regularly above seasonal values (18 ° C more than average during the peak at 44 ° C on June 28th).

In parallel, rainfall remained very low with less than 15 mm of water in June, less than 8 mm in July and nothing during the first decade of August.

Winds were regularly quite strong, above 50 km/h, with peaks above 100 km/h sometimes.

The graphs and tables below give the values of the meteorological data recorded over the period. 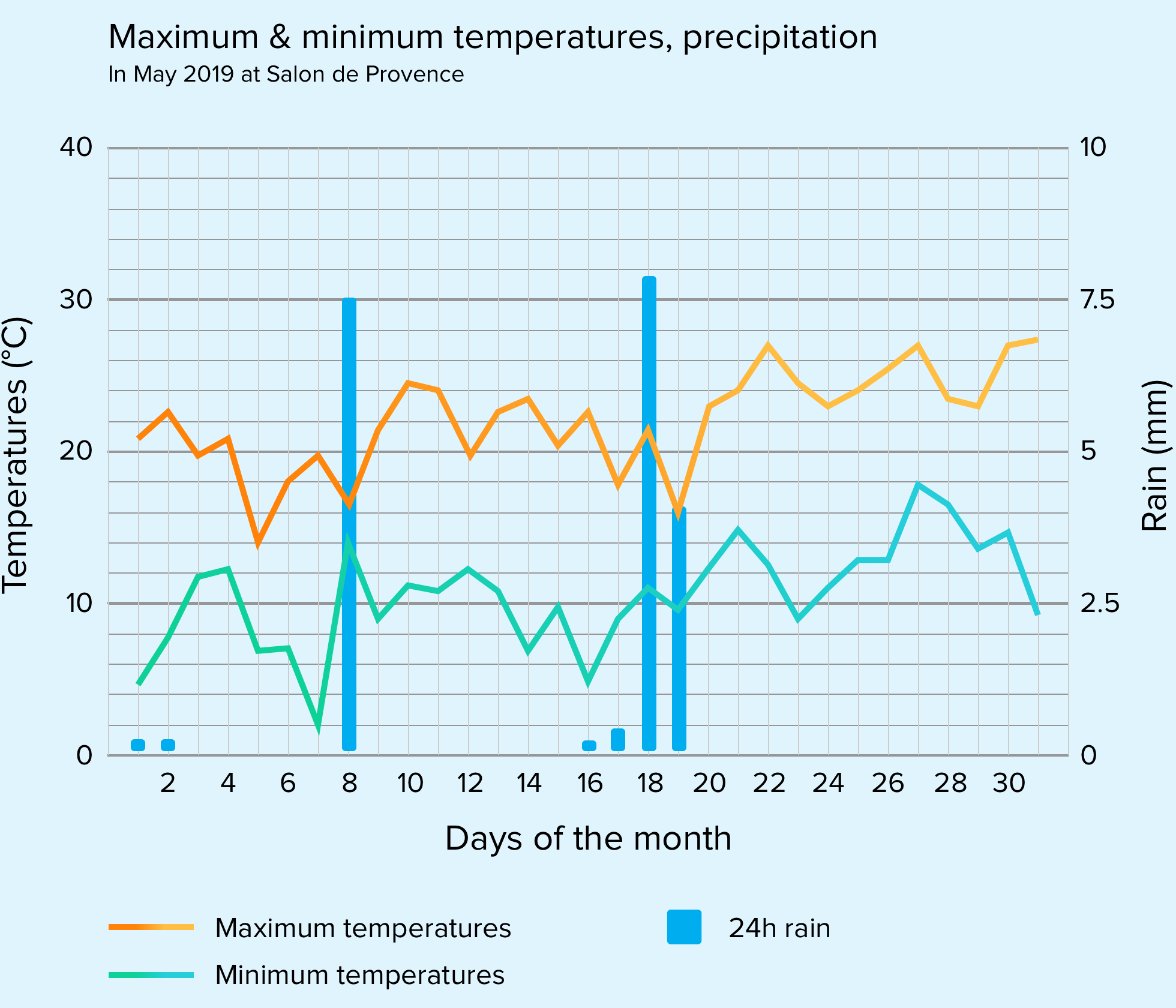 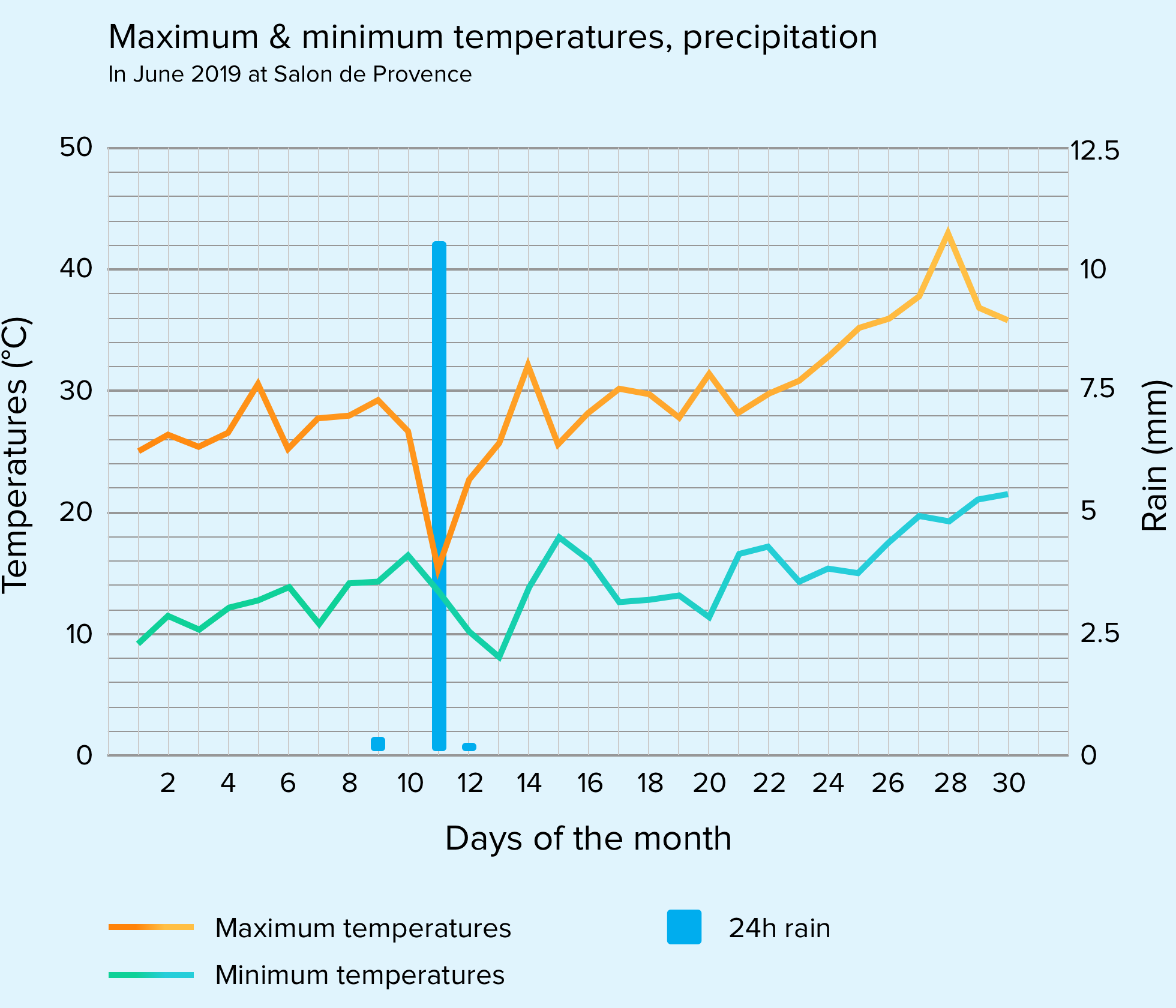 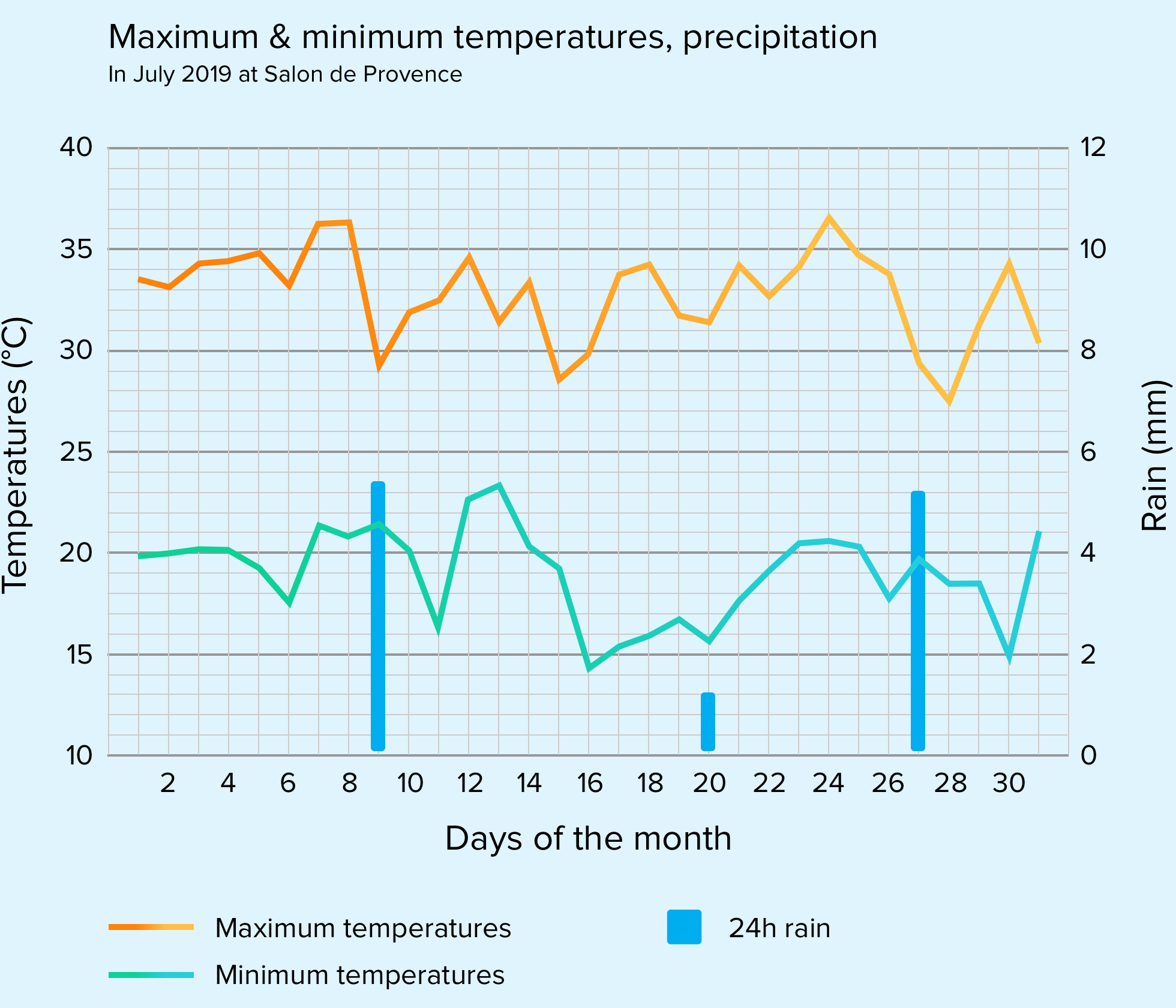 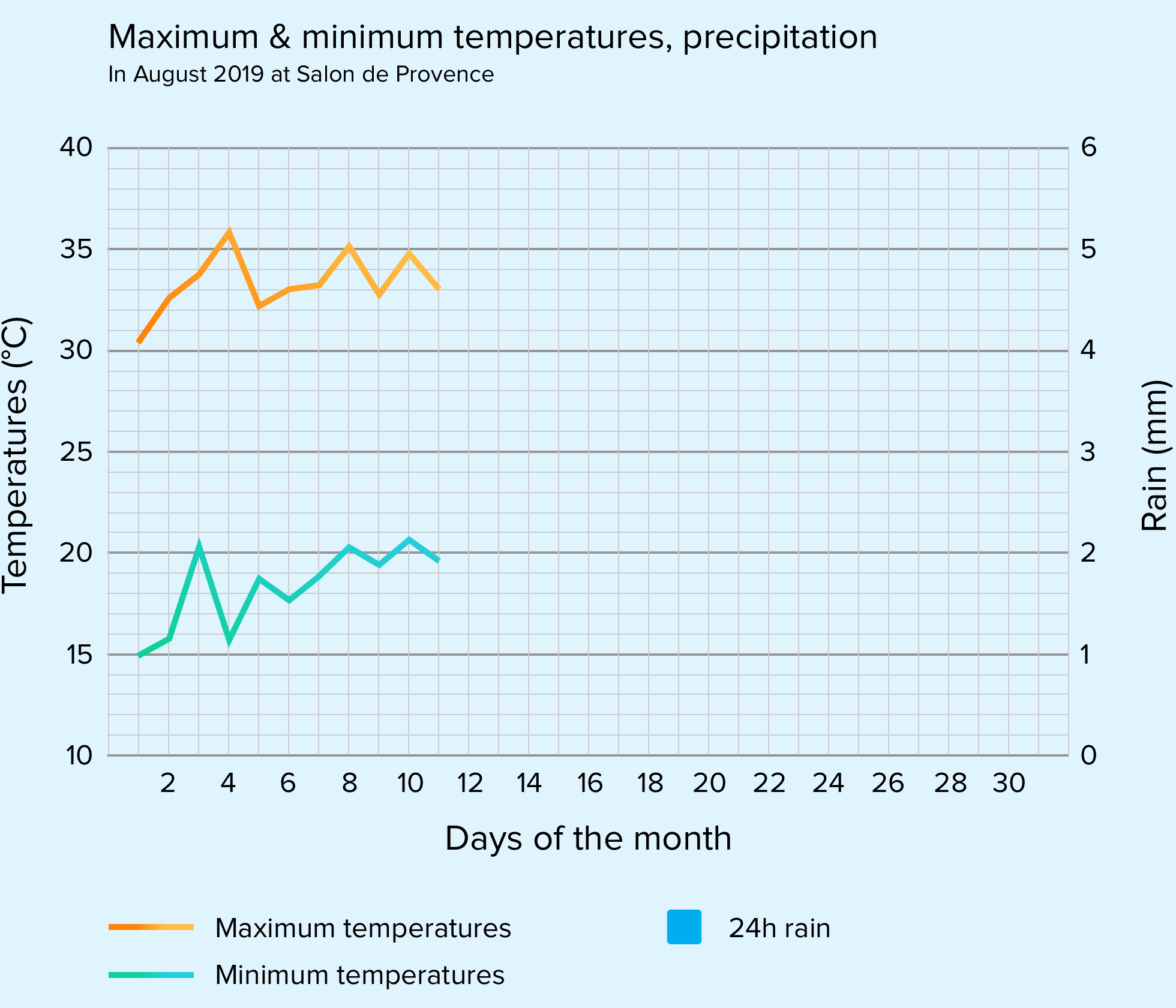 A typical harvest was carried out on August 5th, 5 days after the previous harvest, to start on a stabilized crop. Only mature tomatoes were taken. 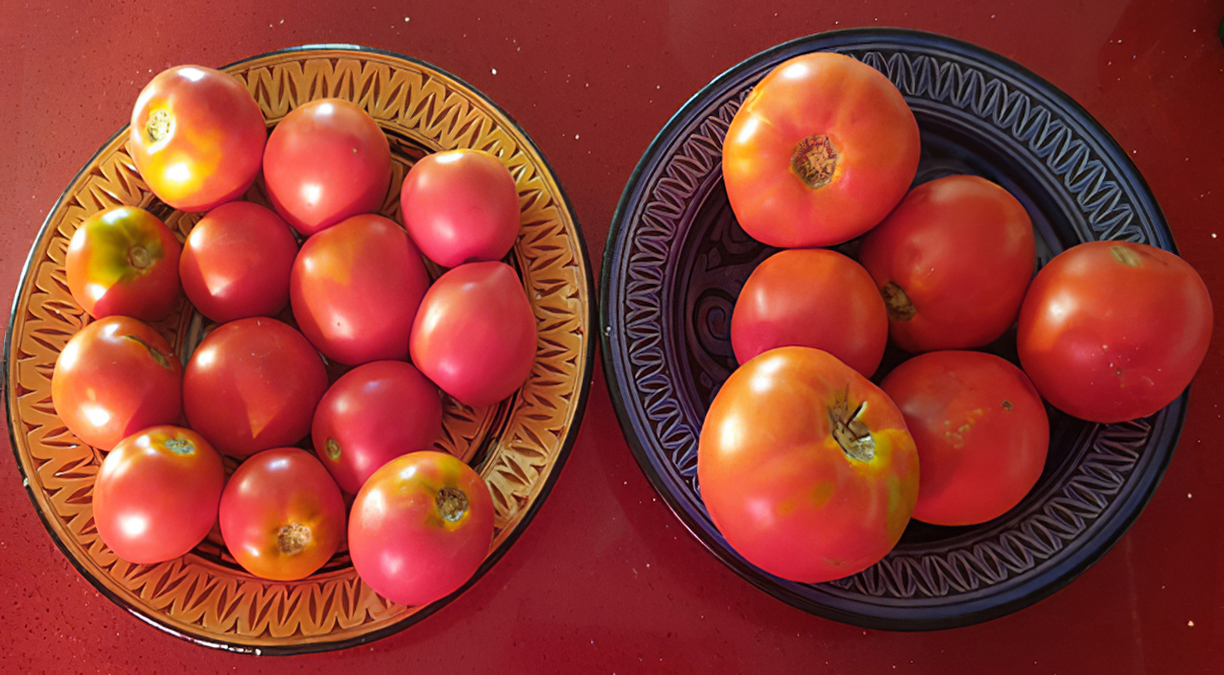 We can see that tomatoes grown without RAINCATCHER are of the same size and rather small comparing to the average fruits of the used variety (the diameter of the harvested fruits ranges from 56 to 71 mm). It is due to a shortage in irrigation water experienced by the seedlings from the end of June.

The fruits produced with RAINCATCHER are rather big compared to the variety standard with 75 to 106 mm. These permits to confirm the compensation by RAINCATCHER of the effects of the water deficiency voluntarily applied since June 1st. Tthe fruits have remained normal or even bigger than the typical fruit of the variety, despite the high temperature and the wind

Comparison of the biggest collected fruits.

If, under artificially created conditions of drought, tomatoes produce fruits with size on average at the lower limit of typical fruits of the variety, when using RAINCATCHER®, on the contrary, enables to get fruits with sizes of the upper part and above of the normal weight of the variety.

When we count the mass produced per plant/tree, we obtain 145 g per untreated plant and 382 g for the average of the plants treated with RAINCATCHER.

During the experiment carried out from May 11th to August 5th, 2019 in the South of France, on a field crop of Cobra Hybrid F1 tomato, the use of RAINCATCHER gave very significant results.

The collected data show that, in unfavorable agricultural conditions, due to poor irrigation and meteorological conditions characterized by very high temperatures, relatively strong winds and extremely low rainfall during the fruiting phase, the use of the RAINCATCHER® (Raincatcher) allowed to produce 4.8 times morefruit mass per plant and about 30% more fruit than control tomato samples.