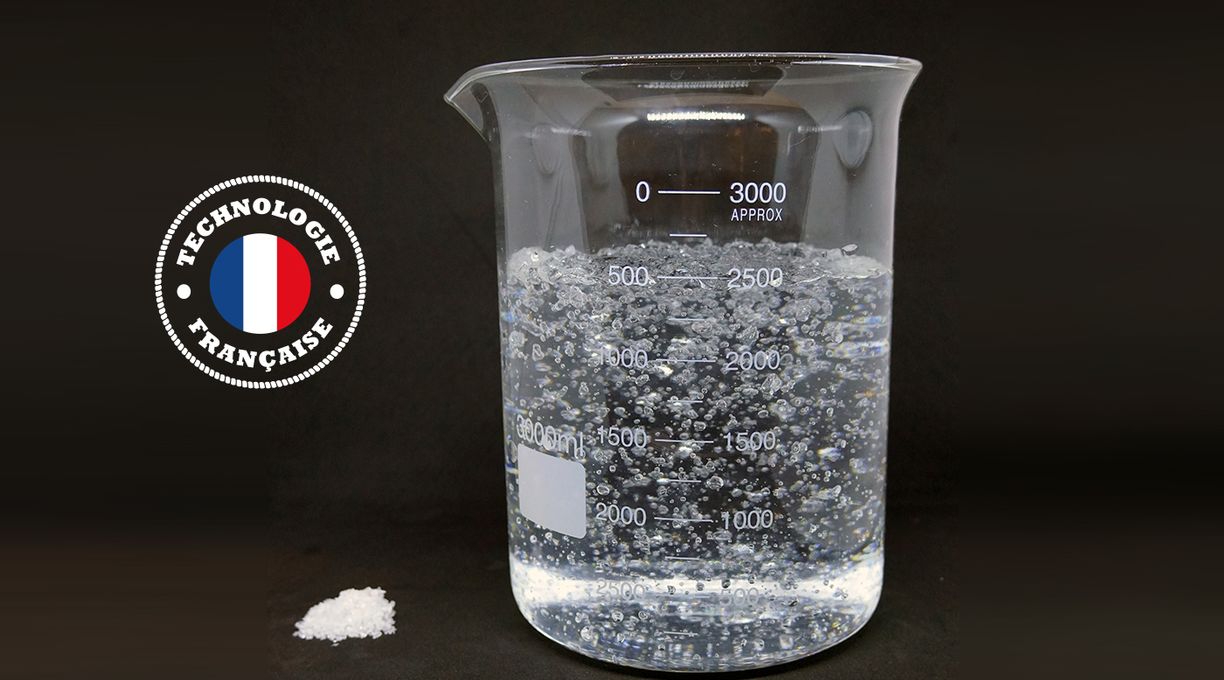 Absorption, granulometry, biodegradability, operating cycles: all the secrets of the RAINCATCHER.

The main quality of RAINCATCHER regardless of its declination (BLUE, GREEN, H or DEW) is its water-retaining property. 10g of crystals can take the form of 2.3-3 liters of solid water. 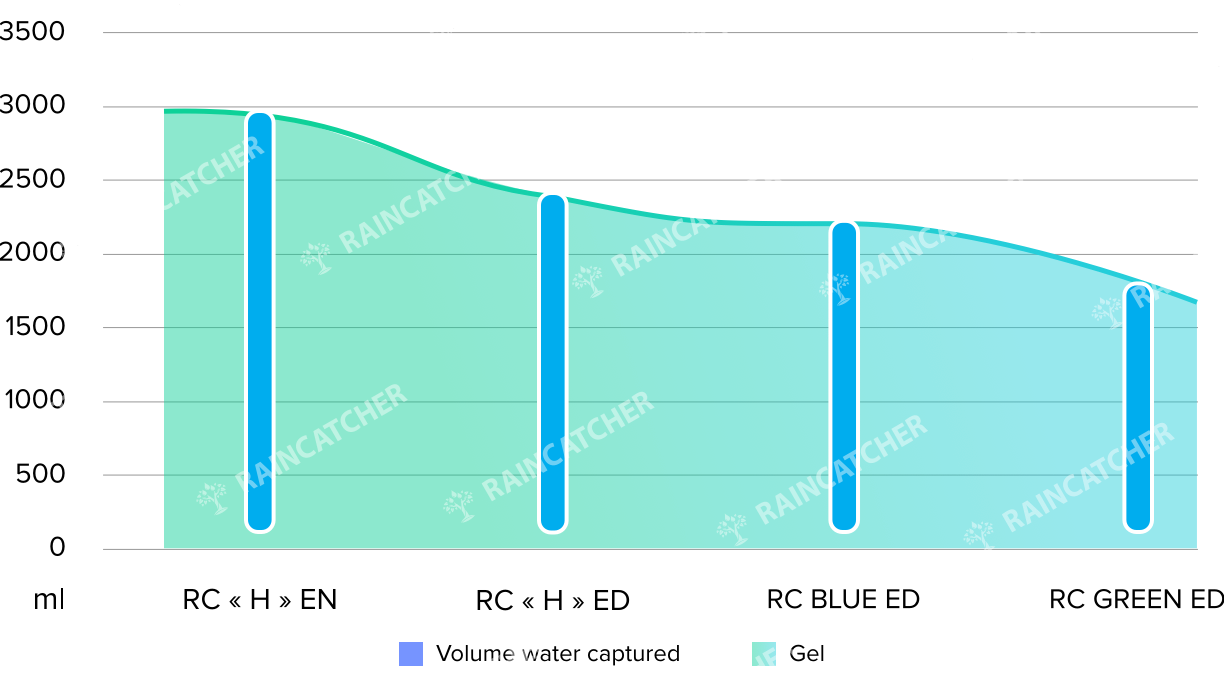 The RAINCATCHER H, which does not have a growth activator and is mainly intended for arid and desert climates, is the most powerful with a capacity of 3 liters of natural water for 10 grams of crystals.

The RC BLUE, classified in the category of organic and mineral fertilizers, absorbs 2.3 liters of distilled water per 10g of crystals. In fact, it has a 280-fold absorption capacity in natural water but is, in addition to desert or arid climates, more efficient in terms of influence on growth because it has nutrient inputs that boost the plant.

It should be noted that the mass of the gel obtained after absorption is slightly similar to that of the water supplied to the crystals.

The gelling operation of the water therefore consists in changing the crystals with a density of 0.82 to nodules with a density close to 1 while increasing the size of these by about 300 times.

GRANULOMETRY AND SPEED OF ABSORPTION 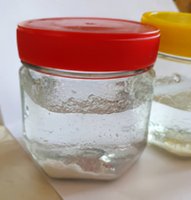 The granulometries of RAINCATCHER products are between 0.8 and 2 mm with the exception of the RC DEW whose vocation is to "capture" the dew in countries with hot and humid climates (Dubai, Dakar, New Delhi, etc.). This density allows the creation of gel nodules whose size is adapted to the needs of most plants.

The finer the particle size, the faster the product precipitates.

On a particle size of 0.2 mm, the addition of water to the crystals immediately precipitates the water without giving time for all the crystals to leave their solid state.

It should be noted that the temperature of the water is also an important criterion regarding the speed of crystal transformation into solid water nodules.

The hot rains will thus favor a rapid transformation of the RAINCATCHER, as opposed to a cold water irrigation which will require 4 times more time to arrive at the same result.

Another important factor concerning the speed of absorption is the ratio "grams of crystals" / "quantity of water". 10 grams of crystals will quickly absorb 1 liter of water but the additional 2 liters will require time to be fully absorbed.

TURN BACK TO CRYSTALS FORM AND BIODEGRADABILITY

RAINCATCHER has the property of transforming from the state of crystals to the state of gel (solid water) in a cyclic and durable way. 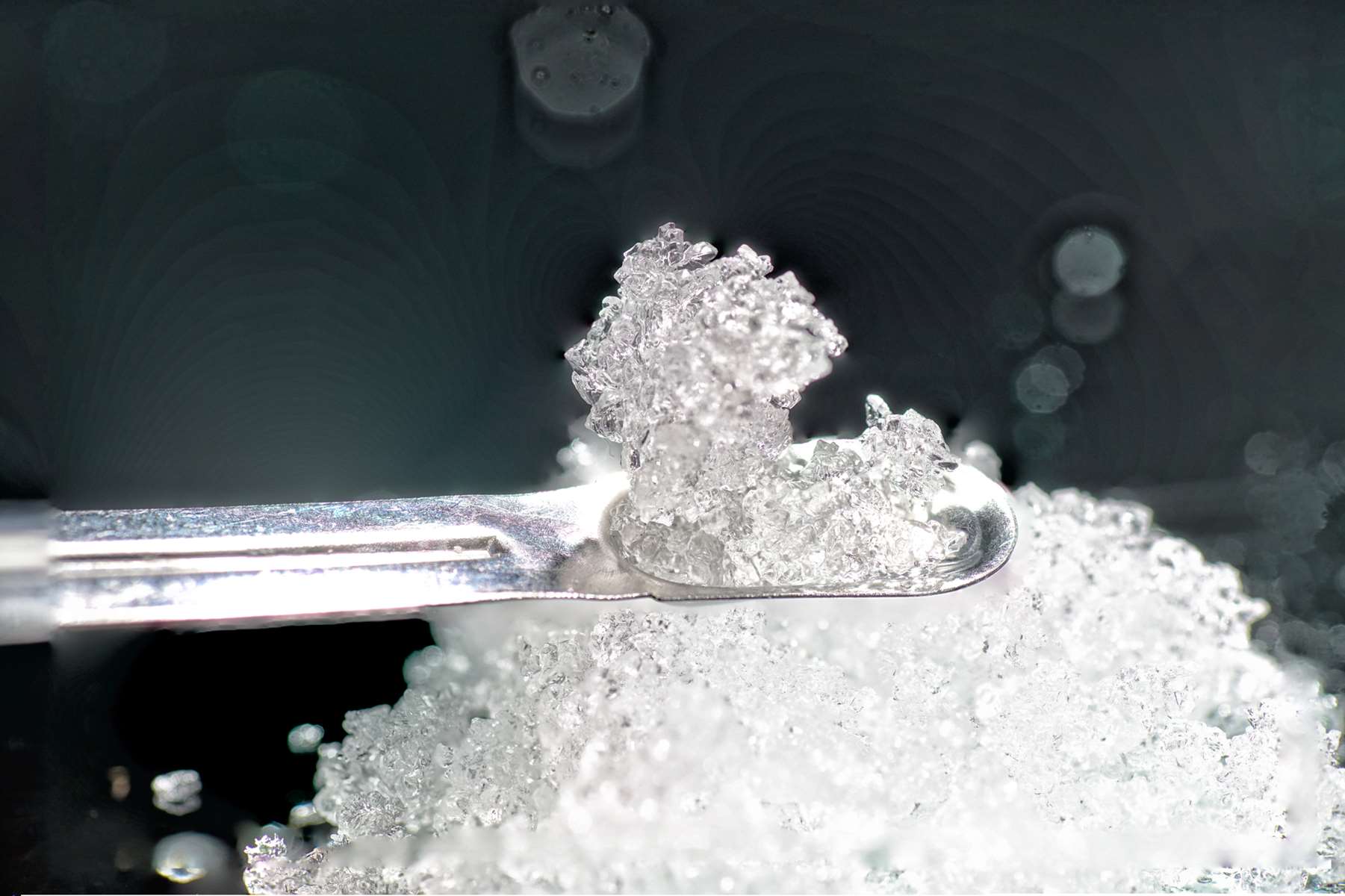 An experiment consisted in mixing 4 grams of crystals with 300 ml of natural water.

The degradation observed under the direct effect of UV is between 3% and 5.5% after 2 cycles.

RAINCATCHER is a biodegradable product that remains active during 3-5 years depending on the number of cycles of transformation and:

RC DEW is applied on the surface to capture dew in countries where the climate is hot and humid, would decompose in about 6 months.